Real life examples of how one NYC Wedding Coordinator has dealt with potential wedding and event disasters and the lessons she learned in the process.

If you are working as a day-of wedding coordinator, chances are you did not have any input on the choices that were made for the event. But it is your job to make the best of even the worst decisions.

For example, I worked a wedding for an out-of-town couple from the Midwest that was having a destination wedding in New York City. Let's call them Janet and Tom. When Janet and Tom planned their event they had no concept of (among other things) how long travel within the city would take on a summer Saturday. Without considering how it would affect their event, they booked venues in three different neighborhoods of Manhattan. 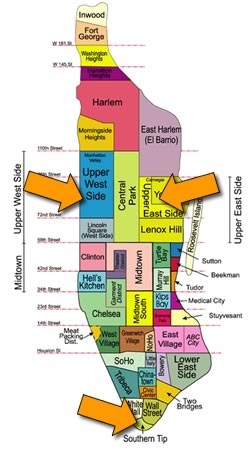 Janet and Tom got ready at a hotel on the Upper West Side. The church was on the Upper East Side. The reception was in Battery Park. To give you an idea of how far away all of these locations are, here's a map:

In case you are thinking that it doesn't seem that far to go from the West side to the East side, trust me it is. On a summer Saturday afternoon, everyone wants to drive into the city to do something. Traffic is a nightmare, and it's especially hideous when you have to go across town. Had they hired a local planner to help them (instead of a day-of coordinator), Janet and Tom would have had a much easier wedding day.

As it was, Janet allotted for 15 minutes to get from her hotel to the church. As she was getting ready, she started to run behind schedule which would have meant leaving with even less time to get to the ceremony. I tried to get Janet to understand that she actually needed to leave earlier than planned, but this was one stressed out bride and she didn't want to hear any of it. In fact, Janet didn't want to hear anything from anyone that day. She even ordered the photographer out of the room!

So, I did the only thing I could and made sure that everything and everyone else was ready to go early. I made it very clear to all of the bridesmaids and family what it would mean if they didn't get into the limo early or at least on time. It would mean a very late start for the ceremony which could have a domino effect on the reception, which had a very strict start and end time.

Working with the bridesmaids, I actually managed to get Janet into her limo on time. I'm just glad I wasn't in that limo as it crept through the park at a snail's pace. I can only imagine how the traffic added to Janet's stress. After all, she was 20 minutes late for her own reception.

At most destination weddings, the guests are just as unfamiliar with the location as the couple. Imagine 150 people exiting a Park Avenue church without any clue where to go to next. Unfortunately, that's just what happened, and I had be the one to tell them that the reception was a good 45 minutes away! Needless to say, they were not pleased.

The couple had provided a couple of buses to transport most of the guests to the reception. Sounds good, right? Except that after everyone had boarded buses, Janet and Tom decided they wanted to keep the entire bridal party and all the relatives at the church to take photos. This meant that either the buses could leave to go to Battery Park in the southern part of town (but then the bridal party and relatives would have to figure out how to get there on their own) or the buses had to wait. And wait they did - for almost an hour.

Kids were hungry, people were cranky, and - worst of all - it seemed like the couple didn't care at all. In fact, they were upset with me (the day-of coordinator!) about a situation that they had created. I did what I could to move the picture-taking along, tell guests where they could go to get kids a snack and tried to keep guest morale up by being chipper about the situation and cracking jokes.

At the end of the day, the day-of coordinator can only work with what she's given. Janet ended up apologizing for her behavior and relaxing enough to enjoy her reception. When given a poorly planned wedding (and a difficult bride) you do the best you can. As long as you keep a cool head, plan ahead, troubleshoot when needed, and be prepared for anything, you'll be able to make the best of any event.

You can also learn about all things to do with planning a wedding by earning NYIAD's weddng planning certification. 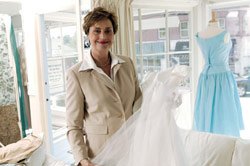 The Guide to Wedding Attire for the Discriminate Bride

Here comes the bride, all dressed in — ? Shopping for wedding attire isn't easy. For many… 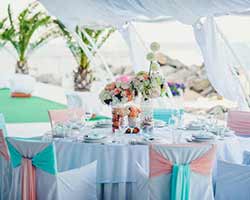 The New York Institute of Art and Design offers online wedding planner courses and because we do, we like to provide free tips for wedding planners. Enjoy!