Designer Monthly's Little Things column places a spotlight on those home accessories that are often overlooked, and we at NYIAD will show how they can be improved to make a world of a difference. Our pursuit is to enhance the decor through economical yet aesthetically superior measures.

The call to live a simpler life without technology or expensive things can be very alluring in this frenzied world where such things abound. Thoughts of homespun living and connecting with the past become attractive when the complexity of everyday life is stressful. This month, we're exploring rustic themes and decorating for a simpler home.

In earlier days, people didn't live near—or even have—a furnishings store and so they became adept at making their own furniture and decorations. To the early pioneers of the land, practical considerations came first, so the first furnishings were functional first and decorative second. Some of the objects they crafted were weather vanes and whirligigs. Weather vanes showed the direction of where the wind was blowing from, a clue to a shift in weather and information early settlers needed to help with the farming. From weather vanes, whirligigs were developed, and these were purely decorative objects. The rooster sculpture below began its life as a weather vane and then was converted into a lamp stand. Made of French zinc, the rooster is from the 19th century and can be found at Antiques on Old Plank Road. 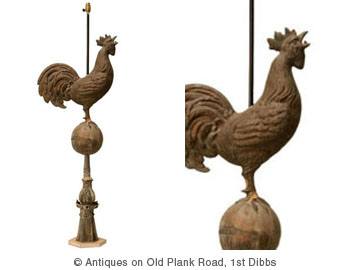 The rider on a primitive carriage was also a weather vane from the early 1900s and made of copper, painted in silver. The weather vane was later mounted onto an iron stand. Simpler whirligigs were made of wood and painted to look like animals like this pheasant whirligig below. The weather vanes or whirligigs can be displayed in bookcases or buffets. 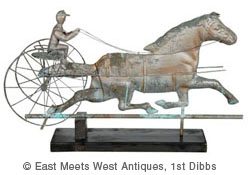 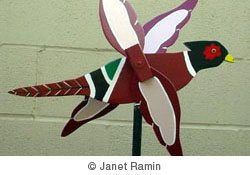 In the early days, people had no choice but to cook at home as there were very few restaurants or diners. Forging and hammering your own pots and pans from iron or copper was a skill many settlers acquired. The colonial cooking pan and teapot below from Elizabeth Street Gallery are both made of copper. These copper pans, when hung in a set, can be a gleaming decorative device. The teapot, besides being functional, can grace a dining breakfront. 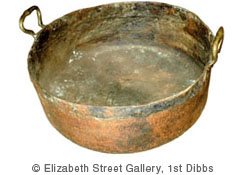 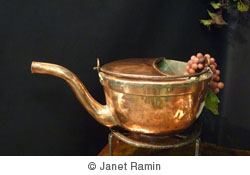 Early homes didn't have indoor plumbing, so settlers had to haul water from a well or a river outside their house. Water jugs were quite common household items. These jugs were fashioned from thin planks of wood that were strapped together, similar to a barrel. Water jugs can hold fresh or dried flowers or even sheaves of wheat. On the right is a weathered metal vase that started its life as a funnel and was transformed to a beautiful vase. 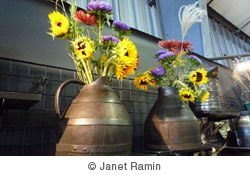 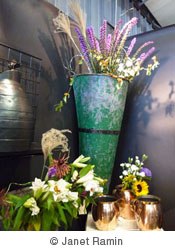 Another practical item that could be transformed into a decorative object is this giant pulley from the early 19th century. These handsome wood pulleys can become a centerpiece for a table or even hung on a wall as art sculpture. Something very functional such as an old weathered wood door has been many an artist's or photographer's subject. This weathered red door, coupled with an old giant clock, makes for a unique standing sculpture for any rustic room. 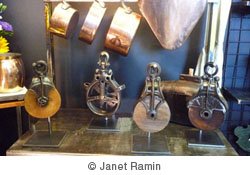 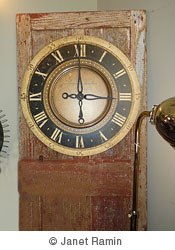 Toys for children of early settlers were usually simple and handmade. Wooden rocking horses were made of a local tree that a farmer probably chopped down on his land and then hand painted as seen in the blue rocking horse below. Leather-making was another skill early settlers achieved, resulting in leather-crafted toys and decorations. The rocking chair below is made of leather from late 19th century France, courtesy of Holmes Samsel Antiques. 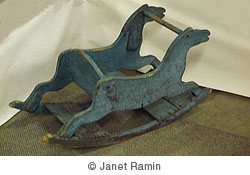 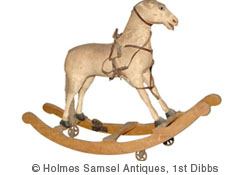 Another homemade toy is cloth dolls. This late 19th century doll from Woodard & Greenstein is made from leather, cotton and stuffed with straw. The doll's bodice and dress is made from leftover scraps from dresses. The hillbilly dolls from East Meets West Antiques are examples of folk art from the Ozarks. Its heads are made of hazelnuts and hand painted. The male doll is dressed in a homespun shirt and denim overalls and the female doll is clothed in a calico dress. These dolls can hand a homey touch to a bedroom or a children's room. 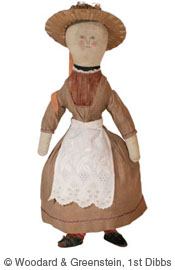 Antique fairs or stores have a wealth of rustic accessories. Sometimes you may even pass a barn sale or yard sale that offers treasures like these. It just takes a creative touch to transform them into decorative objects for a home. 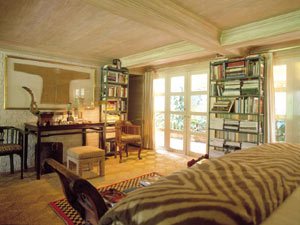 Room of the Month - Safari Bedroom 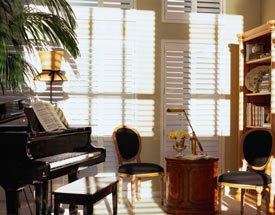 Many times good interior design counts on a certain kind of sleight-of-hand: The very best job is the one you…