A Day with Designer Adele McGann

In this special NYIAD article, we spend a day with designer Adele Mcgann!

It sounds like the plot for a classic Hollywood movie: beautiful woman meets cultured man on board the majestic QE 2, strikes up a conversation, and begins a life-changing relationship. Well, it almost happened that way. The woman was interior designer Adele McGann, and the man was royal portrait painter Richard Stone. There wasn’t a romance but it was a chance meeting that eventually would lead to a design commission for which many designers would give an arm and a leg.

Adele McGann started her career as a fine arts artist and then became interested in antiques. She designed her home in Los Angeles with many beautiful antiques from her travels. Friends and acquaintances stopped by and wanted to know where she bought her furnishings. Soon she was selling antiques and objets d’art from her home and from this accidental beginning, McGann entered the world of design. It was a short step from there to becoming an interior designer.

On one of her many travels abroad, she and her husband were on board the QE 2 when she bumped into a fellow artist – Richard Stone – and soon they were swapping stories. Stone became famous for his portrait of Queen Elizabeth II. He was also moving to a new home in Colchester, England. Several months later, McGann was invited to design his house – the West Bergholt lodge. The resulting gorgeous design attracted the attention of Architectural Digest magazine and earned her the November 2006 front cover. For a peek at the issue, go to Architectural Digest.

Earlier this year, I spent a day with McGann, at her home in New York. McGann elaborated on how she found her unusual apartment. She had been living in Los Angeles for several years and was fast becoming a bicoastal designer, frequently flying to New York to work with clients. The Architectural Digest article also gave her a boost in her career. Her children had grown up and moved out and she needed a change of scenery. Real estate prices had escalated in Manhattan, so finding a place where she could live and work was challenging. A friend mentioned that a dentist had retired and his ground level office in the Upper East Side would soon become available. McGann checked the place out and found a series of small examination rooms and offices with very little storage – a major challenge to renovate and make livable. But McGann thrived on difficult design problems and several years later, a jewel box of a space was created.

First, she turned the reception area into a front parlor. It was a small room and she opened the space up by covering one wall with a mirror which reflected the rest of the room. She added an oversized oil painting to provide focus and interest to the parlor. Since the parlor was the first room visitors would encounter when entering the apartment, she gave it warmth by enveloping the walls in a creamy buttery yellow paint. 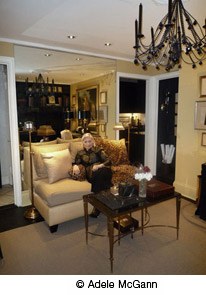 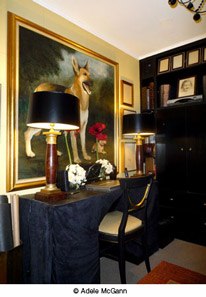 The largest office she converted into her living room. Since there was only one small closet, McGann had to address the lack of storage space. She solved the problem by building up the wall surrounding the fireplace with two built-in closets. She also added several large armoires to augment the storage. To further expand the illusion of space in the living room, McGann applied a white-on-white monochromatic color scheme. But by only using white everywhere, the room ran into the danger of becoming bland. McGann avoided this pitfall by installing sparkling cream and silver striped wallpaper by Ralph Lauren to cover the walls. She then included spots of color by decorating with patterned pillows and green topiary plants. 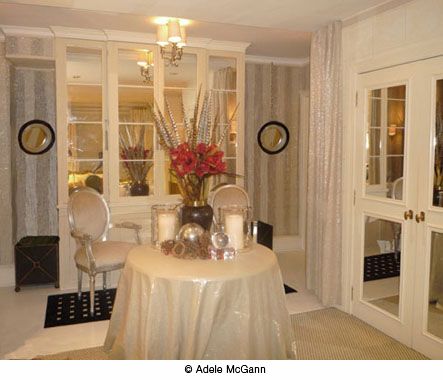 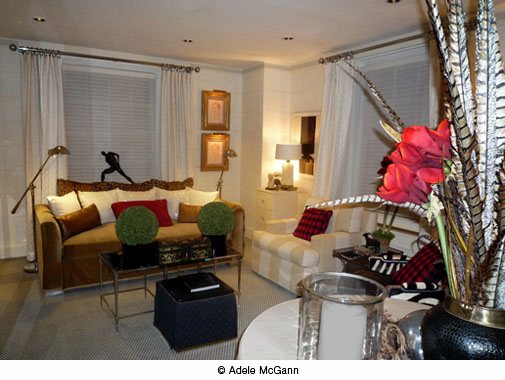 The apartment still lacked two necessary rooms – a bedroom and a kitchen. Since it was a dental office, there was no facility for a kitchen with the requisite gas hookups. McGann converted a narrow examination room into the kitchen and spent a good portion of her budget on labor and obtaining the appliances and cabinets. To cut down on the rising costs, she bought cheap cabinets and transformed them to a custom-look by wrapping the doors with black textured basket weave wallpaper. The effect is sophisticated and unique.

The final problem was placing the bedroom. Since the remaining rooms were tiny, McGann had to compromise. She converted one space to a bedroom by building a custom-made Murphy bed. One wall housed the large cabinets that hid the drop-down bed. By day, it was a small den but by night it became a bedroom. The last remaining space was a narrow hallway which became the foyer. A portrait of McGann and her husband by Richard Stone now hangs on one wall. The painting is surrounded by black faux-cheetah print wallpaper that she created, making for a dramatic entryway into an extraordinary home and a fitting reflection of a very ingenious designer. 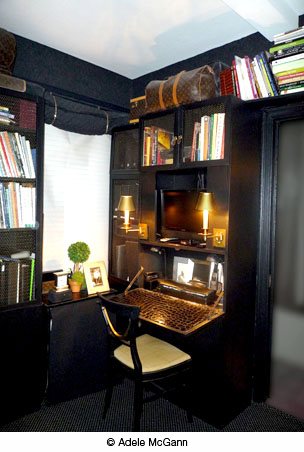 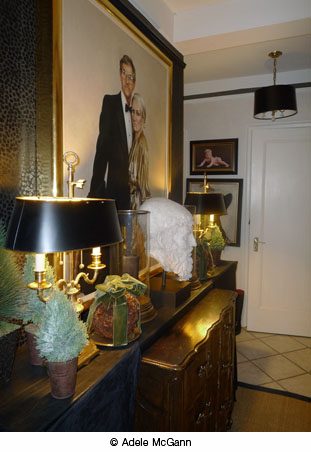 Designer Monthly's Little Things column places a spotlight on those home accessories that are often overlooked, and we'll show how they can be improved to make a world… 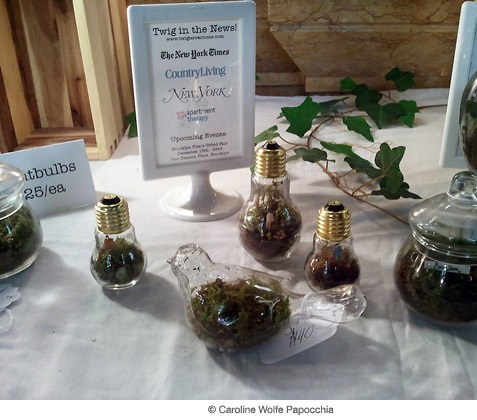