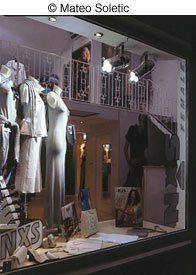 Like many successful interior designers, NYIAD graduate Mateo Soletic, came to the field from a related discipline: fashion. Clearly, an eye for design is an eye for design, and appreciation of aesthetics crosses many boundaries. And this interest wasn't a mere dalliance: in his fifteen years in fashion retail, he opened ten different stores in his native country, Croatia. It was in trying to make the stores look as good as the fashions for sale in them that Soletic started looking into designing the stores' interiors in order to 'differ from the competition.'

'I started to figure out how could I make the interior of a store that would make the difference,' he says. 'It was obvious that if I was going to succeed that I would need some fresh ideas. I would have to travel and find some inspiration.'

With a clear idea of the concept of one of his stores ' a multi-brand jeans store with a target market of young adults ' he set out to Italy to see what he could teach himself about interior design.

'I walked the streets and took pictures and notes of all the interesting details that I saw,' he says. 'I saw that the latest trends in those kind of stores was a wooded, country, rugged western kind of style which especially predominated at Levi's.' 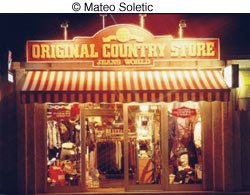 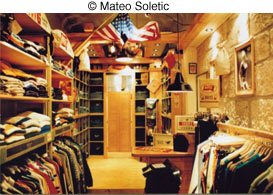 'Over the couple of days I devised my own narative concept and the story went like this: it is a general store somewhere in the early American province, a place where you could buy everything. I called the shop Original Country Store. I especially paid attention to details. I got hold of some old junk like a water pump, old tins and bags of coffee, original American money bags, flags and so on.'

And so Soletic's new career was born. But he continued working in fashion retail; it was just that now he knew a bit more about how to make the store look as he wanted it, and how to make the design of the store bring in customers and retain them. 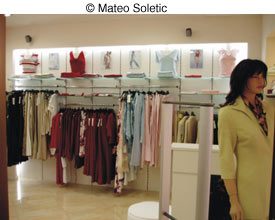 'At that time I thought if I made a good impression in my store, then everyone would see the good job that I did, and maybe someone would give me a job decorating their own premises ' and that was the one and only thing I ever wanted to do.'

The business flourished, but it was 'seriously undercaptialized.' And at that time, banks in Croatia weren't giving loans, so Soletic had to take any profits each day, in cash, and go out and buy more stock to replenish the shelves.

'At that moment I realised the tremendous power of proper design decisions. It's the most important single factor in generating sales, and nothing works better in conveying the right message towards the right target group.'

Soletic by this time knew his true passion lay in interior design, but it took a friend's words of encouragement to get him to start taking his interest more seriously.

'He said to me, 'If you want people to percieve you as something, you have to declare yourself as such. And so I did at that moment.' 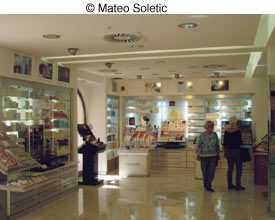 When another friend asked him to design his new men's clothing store, Soletic gladly agreed. As many designers know, working for someone else often proves to be more complicated than anticipated, but this job was followed by others, and now Soletic has fully designed over 200 interiors, retail outlets, bars, restaurants, travel agencies, and offices.

Because he was already a busy business owner, Soletic found that NYIAD's flexible program suited him better than any residential design program would have.

'Any conventional education at this time in life was out of the question. I just didn't have the time.'

Around the time he enrolled in the NYIAD Course, one of Soletic's friends asked for help. She'd gone out and bought a houseful of new, expensive furniture, with no plan for how to place it. 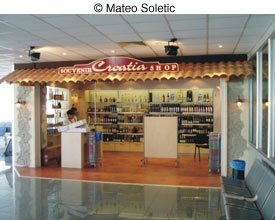 'I somehow managed to solve the pieces of the puzzle in my own head but had a bigger problem in conveying my findings to her. Even now I recall the vague expression on her face. Had I only known then all that I later learned at the NYIAD School of Interior Design!'

Now that he's completed the NYIAD Course, Soletic knows not only how to 'pinpoint a problem and solve it with a step-by-step approach ' but I am also able to describe it with the right words.'

Today, Soletic has plenty of opportunity to use what he learned on his own and through the NYIAD Course.

He just attended the opening of a full-service restaurant he designed, and he's doing a $250,000 project of another restaurant scheduled to open this fall.

'At the same time I am working on a block of about thirty offices and a private house including the garden,' he said. 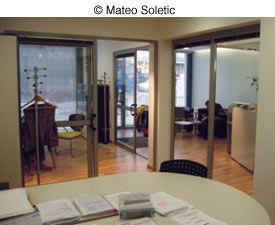 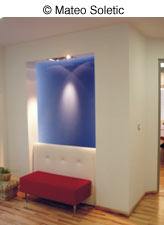 'Actually, most of the work I do at the moment is contract. As my NYIAD tutor Anne Harris said, that she prefers commericial work to residential ' this is so true. It is not that I don't like people, I do, but most people over here don't seem to have a respect for one's time.'

Whether working in commerical or residential design, whether in the U.S., Great Britain, or Croatia, the biggest challenge for interior designers remains the fact that most people who hire a designer want to get more than they can realistically afford.

'In every part of the world design solutions are driven by both economic realities and market realities,' Soletic says. 'Nobody is more aware of that than I am. Living in a community where sometimes a whole budget is less than a designer's fee in America, you sometimes have to be a magician to make a sense of it all.' 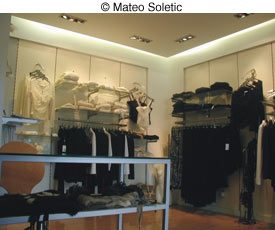 This of course leads to 'unrealistic projections' about the project, and Soletic finds at times that ' it is almost impossible not to compromise the concept.'

'First I have a serious discussion with the client in order to find out if his pocket book matches his dream,' he says. 'If it's a long way off then we are obviously not talking the same language and I suggest him to change his dream or to change the budget, and if he insists, I just thank him and pass on that opportunity.'

But it's Soletic's enthusisastic love of his work that makes most of his prospective clients become happy, satisfied customers. 'My biggest challenge is to convey to clients my own enthusiasm and repeatedly persuade them in the necessity of this and that for an overall concept to succeed,' he says.

Soletic stresses the psyhological aspects of working in design, saying 'It's about confidence. It's about the words in the first lesson of the NYIAD Course where it is said that one day you are going to say proudly these words 'I am an interior designer'.'

'But when you do decide to say those words you better believe in them with confidence, in all situations,' he says. 'Sitting in your home or your office doing design is so much different than solving problems in real life situations. In every job there are problems that crop up, things that you might have overlooked or problems that just arise out of nowhere.'

One example of this is a job Soletic had where workers were taking down a plaster wall, only to find a concrete column in the middle. The owner was furious at this unexpected turn, and everyone was putting in his opinion about what to do.

'I let them wait and sweat for a while, because the more they wait for me the more important I become in their eyes,' he says. 'I arrived on the scene in my best suit to emphasize my importance once again. I greeted everybody and then the owner asked me what to do.'

Soletic answered confidently that in his view, the surprise concrete column created new possibilities for the design. 'That's what he wants to hear, and that's the best thing to say, and you'll figure how this is going to be better while you are thinking in the calm of your own office or home.'

As it turned out, one of the painters had a great solution, the wife of the owner had an even better proposal, and Soletic listened, out of respect, but didn't act right away, in order to maintain his status as the professional designer.

'I always keep in mind the fact that people are prepared to pay for two things only, and those two things are good feelings and solutions to problems,' he says.

'So at all times you have to be on top of things,' he says, and that means studying aspects of the businesses for which you're designing. For example, if you're designing restaurants, you have to have some knowledge about kitchen equipment and menu planning.

'From day one of my design career I devised a plan, and for every new job I get I will reward myself by buying a new book,' he says. Soletic's continued studies have led to his having a library of over 200 books on aspects of design. Some of his favorites are Restaurants That Work by Martin E. Dorf, The Art of Illumination by Glen M.Johnson and the Pantone Guide to Communicating with Colour by Leatrice Eiseman.

In terms of satisfaction with his career, Soletic says simply, 'I love my work.' 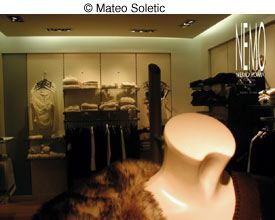 'I never felt so happy and confident about my future,' he says. 'I feel so good doing a profesional service, knowing that I have an ability do something that people are prepared to pay for. Just the thought that I only need a pen and paper to secure a living for my family fills me with joy and pride.'

Soletic continues to work for small businesses, recognizing the importance of preserving this endangered species against the threat of big businesses taking over in his country.

'Small shops are closing every day,' he says. 'Big retail giants are coming in and competition is fierce. But in my line of work I control my own destiny. I just have to work on myself and if I continue to do beautiful and unusual interiors there will always be people from different lines of work that will have the money and will be prepared to pay for my services,' he says.

The furture for Soletic continues to look bright.

'So who knows where I am going to be in future' Apart from that I would like to continue my education, join Interior Design organisations and maybe some day become a consultant or even write a book.'

With all of his experience and education, there's no doubt that Mateo Soletic will continue to succeed in any aspect of design he pursues.

Not only for houses, Our Interior Desgin courses can help you create the best possible retail enviorment and get customers shopping! Like Mateo says: "It's the most important single factor in generating sales, and nothing works better in conveying the right message towards the right target group."