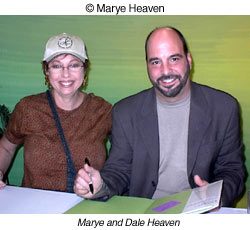 Anyone who has started an educational program after high school knows that the support of friends and family is crucial in getting through the coursework ' especially when you're holding down a job and are engaged in all the work of maintaining daily life.

For Marye Heaven, that support comes in spades from her husband, Dale, who sent us an email a few months ago boldly bragging about his wife's great start in the interior design field ' and she hasn't even completed the NYIAD program yet!

In that first email message, Dale explained that he was writing to us because Marye 'seldom blows her own horn, so I'll have to.' They've been married for eight years, even though Dale says this is 'not long enough,' adding, 'We met on a blind date 11 years ago. Marye is the best thing that has ever happened to me, and I adore her.'

A few years into their marriage, Marye was particularly inspired to pursue her dream, when she started watching Interior Motives, Christopher Lowell's first series on the Discovery Channel, before it became The Christopher Lowell Show. 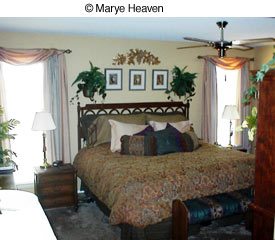 When Marye took the plunge and enrolled in NYIAD's Complete Course in Interior Design, Dale says he had just one thought: 'You go, girl!' What prompted Dale to write us was Marye recently landing her first job in the field.

'She still has a few lessons to go in the NYIAD Course, but that didn't stop her!' Dale wrote. 'Yesterday was her first day as a designer at Ethan Allan here in Phoenix! Ethan Allan is a great place to work, and gives her an opportunity to get her 'chops' as a designer. She's very excited to work in her Field of Dreams, and so am I.'

When we contacted Dale and Marye later, we found out that it's no wonder Dale knew how to get his wife some publicity: before taking an early retirement, Dale was a marketing specialist and multimedia designer for the U.S. Postal Service Headquarters in Washington, D.C.

Because not every NYIAD student has a marketing specialist in her corner, in the NYIAD Course and on our Web magazine, Designer Monthly, we include concrete information on how to run ' and promote ' your interior design business. 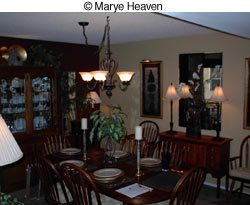 But even though her husband is her biggest fan, Marye landed her current position, which is her first as a designer, simply by taking matters into her own hands, and making good use of her self-confidence. 'I walked into the store with confidence, high hopes, and a resume in hand, and asked for a job!'

Now, she's a Design Consultant at Ethan Allen, and loving every minute of it.

'I'm creating rooms for my clients from floor to ceiling, from window treatments to accessories,' Marye said. 'I do home calls, measuring rooms, drawing floor plans, furniture placement, etc. 'exactly what NYIAD taught me. I help select fabrics and order the furniture. I'm at the client's home at time of delivery, to ensure everything goes as planned.'

As much as she enjoys the work itself, Marye's also quite pleased with the working conditions at Ethan Allen. 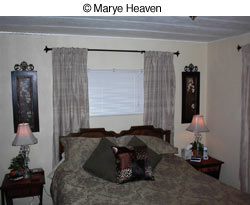 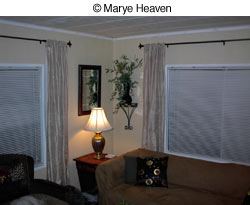 'Ethan Allen offers great support, helping me promote myself to the community. We are always free to be creative,' she said ' and every designer knows that creative freedom is paramount in having a happy job life!

Marye may not have always known that working in interior design would be as good as it is, but ever since she was a child, she knew she wanted one day to head in this direction. 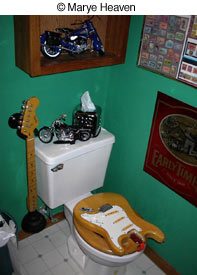 'As a child, I had a fantasy,' Marye says. 'I wanted a beautiful bedroom that was just mine. A bedroom my family couldn't afford. I've always had a sense of style and class ' it just took me many years to manifest my passion.'

Now, when she's asked what she likes best about her new profession, Marye says simply: 'Everything!'

'I love helping people realize their 'Dream Home', a home that reflects who they are, living in comfort and beauty,' she says.

As for the future, Dale is going to pursue his dream of writing an action novel, and Marye sees the future as being 'whatever I want it to be.'

We're sure that with their combined positive attitudes, Marye and Dale will achieve whatever they want!

Come learn at our interior decorating school and become a success just like Marye and Dale!