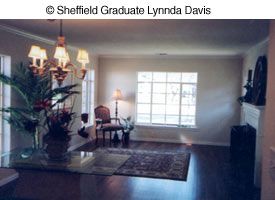 One of the most exciting things about the NYIAD Interior Design Course is that it draws those adults who consider themselves "lifelong learners" – those people who know that the best way to improve is to admit that you're still learning.

Lynnda Davis is one of these students. She makes it a point to continue learning not only while taking the Course, but also while restoring old houses and starting up her own Interior Design business.

Even though she's now bought, restored, and sold several houses and is starting her own design business, Lynnda still asks advice of everyone from fellow designers in her community to the clerks in the lighting department of home improvement stores.

"Do not be afraid to tell them you are still learning," she advises. "Eventually, you will become the expert, too, or you will quickly know where to go to find the experts."

Through taking the NYIAD Course, Lynnda is now launching her own interior design business, but she plans to continue restoring houses with her husband, Steven. 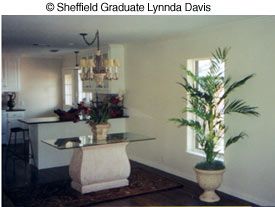 "Ultimately, I would like for the majority of my business to eventually come from interior design, but in the meantime restoring homes provides me with some income, experience, contacts and most of all quite a bit of free time because I am overseeing the work not actually doing it all myself," she says. "I need the free time right now because I'm still studying with NYIAD."

Lynnda prefers using the term "restore" to "remodel" because it emphasizes the restoration of something old to its original condition. "Restoration takes into account the rich and unique history of each individual home," she says. "Some homes are older than most of the people we know and therefore have something significant about them."

The house she just completed was a small cottage, in the Greenway Crest section of University Park in Dallas, chosen for its convenient "walk to everything" location, "and because the remodeling that it needed did not involve many structural changes."

Lynnda and Steven carefully selected a house that they knew they could handle; she notes that " As NYIAD and the American Society of Interior Designers recommend, major structural changes should be designed and managed by an architect," so they consulted a structural engineer before buying the property, and found that the one wall they wanted to open up was not a load-bearing wall, so they were able to go ahead with the restoration project.

Most of the work was therefore cosmetic, although every room needed to be redone. 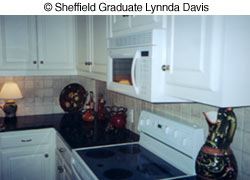 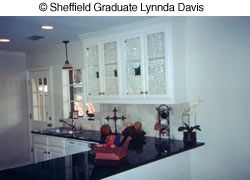 "For example, the kitchen was gutted down to the drywall, or the studs where needed. Custom cabinets, granite counters, new fixtures such as faucets, sink, pull-knobs and new appliances replaced the old. In the kitchen, we also had to lace in new hard wood flooring and add recessed lighting.

"The bathrooms were in worse shape than the kitchen, so you can imagine the work we had to do there. In addition to every room needing a complete overhaul, we had to update the electrical system, make several plumbing changes, add a new roof and have a new driveway poured. We used licensed reputable contractors for these projects," she says. 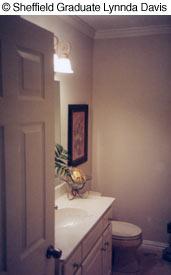 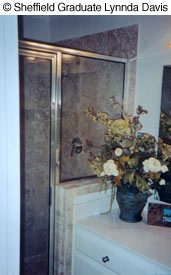 While Lynnda is looking forward to the day she can just do the designing and not the complete restoration, she says it's exciting to work all the way through a project and then see the final result – and to be able to sell the final result for a profit.

"My favorite thing was designing the changes, learning to communicate them so that they come out the way they should, working with a good team of people and of course the finished project," she says.

Lynnda's experience with houses shows that size does matter: she says the most difficult decorating and renovating problem she's had in this latest house is its size: she's only has 1,512 square feet on which to work.

"It was a tough call as to whether to leave it a three bedroom with small bedrooms or convert it into a two bedroom and make the master larger," she says. She was advised by some people to keep the rooms as they were, while others advised her to follow the trend in that neighborhood of cottage and reduce the number of bedrooms. In the end, Davis decided on a compromise of sorts: "We did elevate the ceiling and we added a skylight in the master but the floor space is still small." Next time, she'd try it the other way.

Like many NYIAD students, Lynnda's the kind of person to keep learning as she goes through life, and she's not afraid to learn on the job, saying that the things she learned on her most recent project "are too numerous to list."

One way she keeps learning is by keeping a journal during a project, writing down everything she learns along the way. "I am trying to stay on a pretty fast learning curve, so I would like to avoid making the same mistake twice. By writing down the changes, mistakes and key I have a way of remembering them. This way I can research better solutions in the future," she says. 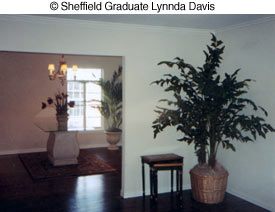 While Lynnda keeps learning as she goes, she says that the foundation she got from the first NYIAD lessons stays with her: "The drafting skills, appropriate measuring techniques and accurate floor plan preparation have helped me communicate professionally with my contractor. Also, the business lessons, especially "How to Work with Vendors" have been important. The color exercises helped me to develop an eye for good exterior and interior paint schemes," she says. "Plus, I am also using the correct decorating buzzwords and language taught in the course!"

While Lynnda waits for this house to sell, you can be sure she isn't sitting idly, but she's using the time to complete the NYIAD Course and to market her interior design business.

"I just got one client who wants help with her window treatments and some accessories, and I'm looking forward to starting this project. When this house sells, I will buy another one to restore. I don't want to work on more projects than I can handle at one time."

The most important thing, no matter what you're doing, is to keep learning as you go. "Once you have decided that design is the business for you, learn as much as you can about it. Read everything you can. Talk to everyone you encounter within the industry," Lynnda says.

Indeed, Lynnda's approach certainly seems to working, as she has plenty of success behind her – and no doubt ahead of her, too!