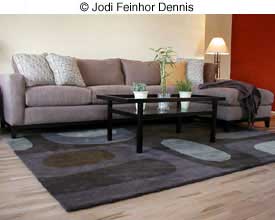 Looking back on it now, Jodi Feinhor Dennis can understand why she was fascinated by watching 'This Old House' on television when all the other kids were riveted by cartoons or sit-com re-runs.

It's because she's got interior designing in her blood.

'Although I had a certain passion for graphic design, it never really filled the hole in my gut,' she says.

Still, it wasn't until four years ago that Jodi made the connection with interior design.

'I was keeping myself busy after my mother passed away, organizing her home, when a light bulb went off in my head. I realized it was the interior part of design that I really loved,' she says.

Not one to sit by wishing for what could be, Jodi started looking for a program in which she could learn about interior design, but which wouldn't require her to go back to school full-time.

'The NYIAD program was perfect. I felt like I needed some practical skills to help me with floor plans, etc. I was really impressed with the program. It gave me just what I was looking for.'

After completing the NYIAD Course, Jodi found a mentor who helped her learn the ropes hands-on, and then she became her own first client, remodeling her newly-purchased town home. 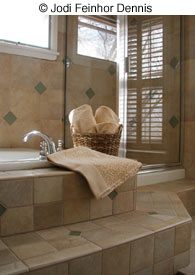 'I remodeled the kitchen and two bathrooms at the same time, standing in a plastic sled, using our kitchen sink faucet as a shower for about a week,' she says ' and she reinforced everything she'd just learned during the NYIAD Course.

One key to Jodi's success is her willingness to start small, with her first 'real' client, a friend who needed an updated basement room, a color consultation for her home's interior, and some advice about dining room lighting.

'Since she was a friend, it gave me the confidence to continue in my new profession,' she says.

Today, Jodi's career path has not only led her to running her own design business, but also to achieving some measure of local fame.

'Ever since I was a kid, I have watched Bob Villa during his "This Old House" days. I still never seem to tire of watching remodeling or redecorating shows.' 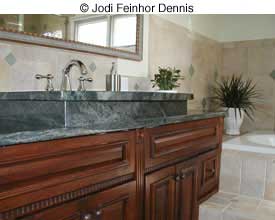 In fact, Jodi likes these shows so much she's managed to get one of her own. It started when she was writing for a local women's magazine last fall, and was asked to write about a 'before and after' of a dorm room.

'I decided it was my shot to produce the first "Make Yourself A Home" television show,' she says. 'It was great fun and it ended up winning the 2003 Boulder Community Media prize in the category of Informational-Demonstration. The show has aired at least 24 times in the local Boulder/Denver area. I am currently editing my second show,' she says.

Even after having gotten this far in her business, Jodi still finds there is a lot more to learn.

'The hardest thing, which I am sure is no surprise, is wearing so many 'hats,' she says. 'I'm creator, manager and overall business chick. I have learned an enormous amount about budgeting, time management, and promotion.'

While running her own design business can be overwhelming, Jodi wouldn't have it any other way ' it's simply what she most wants to do.

'The biggest key for me is that I realized interior design is my passion, and I am happiest working in this field and especially for myself,' she says. 'All the 'pain' and business-building is worth it on every level.'

No matter how organized and talented a person is, sometimes the biggest key to running your own business successfully is knowing when to hire another professional to help out. Once Jodi felt she had her design skills nailed down, she started working on her 'business-building skills.' She works with a professional business coach, who helps her set and make her business goals. 'I have also invested in hiring a bookkeeper to get me set up for keeping appropriate and accurate records for my clients in an accounting computer program,' she says. 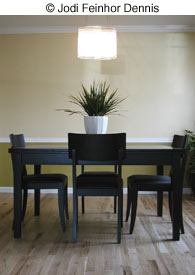 Most of all, Jodi enjoys helping her clients to see what they imagine come to life.

'In helping a client see their vision, I rely on my intuition,' she says. 'I use communication skills, watch the body language and pay attention to the tone in their voice to see if I am on the right track. My goal is to give the client what they want using the best aesthetics possible.'

While some clients prove challenging, others are nothing but delightful to work with, Jodi has found.

'My favorite job was the one featured in the pictures here. He was a young single man, with a good budget, a nice temperament and a good eye for design. We hit a few issues, but had agreed from the onset of the job that we would communicate through any problem,' she says.

'His final words to me were, 'By far, this has been the best professional or personal relationship I have ever had ' you should be proud of yourself.'

'Well, I am, I truly am. This was an amazing job and I hope to have many more just like it.'

Given her hard work, her easy manner, and her enthusiasm for design, we're sure Jodi will!

Come learn at our interior decorating school and become a success just like Jodi!