Initially, Helen Brasinka enrolled in the NYIAD Complete Course in Interior Design simply because she'd always been interested in design and wanted to improve the look of her own home in Athens, Greece. But now, after completing the Course, she's running her own business, specializing in residential, office, and resort design.

'I try to offer unique, custom-made solutions to the demanding nature of interior design,' she says. 'My company's name is Interior Dynamics, a title that I think reflects my philosophy: Interior design is not static, but rather it's a living organism that has to follow the changes and adapt to them.'

Like many other NYIAD students have found, Helen's success began before she even completed the Course, when friends and relatives started coming to her for advice on color schemes and furniture layout.

Interior design is always particular to the city, the landscape, and the climate in which you're working, and Helen quickly learned that in Athens, the age of the buildings often comes into play in working with interior design. In many cases, Helen's found that her clients' buildings need major changes requiring her to call in a civil engineer 'who can study the structure and local strength of a building in case of major structural alterations.' 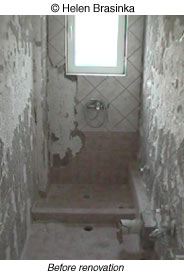 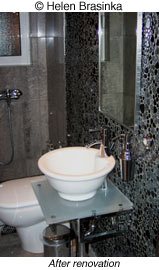 'Renovation projects are very challenging, since at the start of a project, there is an interplay between the reality of old dysfunctional buildings, and their gradual transformation into what appears at first as just a concept,' she says. 'I really enjoy that process since the contrast between old and new, or reality and imagination, help me get the best out of my abilities as an interior designer.'

As often happens, and which is discussed in the NYIAD Course, after working on her own apartment, Helen was asked by a close friend to design her new apartment in one of the older buildings in Athens.

'I had to make the complete color scheme and furniture layout in order to give a fresh modern look without making her spend a whole fortune,' she says. 'The outcome was amazing since for the living room an interesting color palette of white, creamy white, black and grey were accented by orange and red orange. Brushed steel details were the main accent feature that cooled off the overall warm color scheme.' 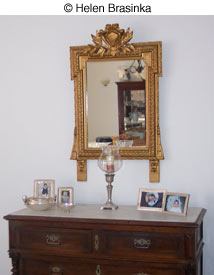 A young couple heard about the renovation and became Brasinka's first paying clients, hiring her for a project involving the renovation of their entire apartment, which was 'actually very dark, in quite bad condition, and the walls were covered in green and black wallpaper that was peeling off.

'Their primary concern was to make the apartment functional and allow the light to flood the living room. They preferred a modern look with some classical elegance, which could incorporate their grandmother's antique chest of drawers; yellow and blue were their favorite colors. They also kept the sofa and armchair that they had bought two years ago, which were almost brand new.'

Helen was able to play around with her ideas when she worked on her own apartment. 'When I first started planning for the renovation of my own apartment I had in mind achieving a look that could combine Oriental influences with my own personality traits. I also wanted the open area of living-dining room and kitchen to be a balancing act of the four elements: air, earth, fire and water,' she says. 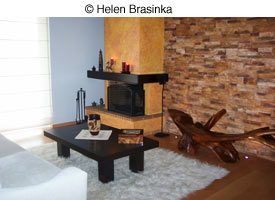 The wall adjacent to the fireplace was covered by bricks, in natural earthy colors of red-brown, honey and slate green, and a faux-finish in muted red-orange was used for the breast of the fireplace.

'The walls were painted in a mother-of-pearl blue-green satin finish to cool off the warm color and match the smooth finish of the fireplace, in contrast to the rough finish of the wall. The cheap tile floor was covered by fine oak wood planks floating on polyurethane membranes, which absorb the vibrations and make the floor very healthy for the feet and waist,' Helen says.

To save on cost, Helen chose to retain the kitchen cabinets, while investing instead in tiles of a metal finish and new work surfaces in oak MDF, giving the kitchen 'a new, more modern, cool effect.'

The kitchen's highlight is the 'modern, sleek panel that provides the back to the Inox refrigerator. It is a two-faced panel of Inox perforated sheet and security crystal in blue-green. The structure allows the light to pass through and lights the long corridor that leads to the bathrooms and bedroom. It is a very cool accent in the overall warm effect of the earthy color palette and the oak wood that dominates the interior,' she says. 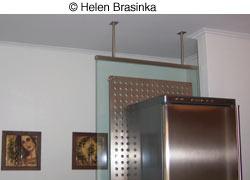 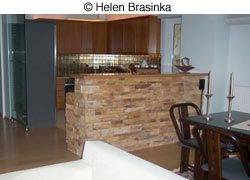 We all know that styles change with the times and with location. But as Helen has learned, the NYIAD Guidelines ' function, mood, and harmony ' can be applied to any style of design.

In Athens, the current trends call for sleek minimalism or classical elegance, and an Oriental look dominates all the residential and commercial styles. It's the job of the designer to bring these looks together into a cohesive whole. 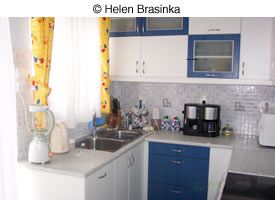 'I believe the NYIAD golden Guidelines ' function, mood, and harmony ' can always provide the basic background for a successful interior design project even when the styles are pluralistic and sometimes contradictory,' Helen says.

With all that residential experience behind her, Helen is now moving into doing more commercial work. She has just completed a project involving the high-tech lighting design for a dental surgery, and she's now working on the overall plan for another new dental surgery outside of Athens.

In Greece, the hotels are busy planning redesigns to prepare for hosting the 2004 Olympic Games, and Helen is busy preparing informational brochures about her company to send to the hotels and resorts.

'The competition is very strong but I think it is worth trying. At the moment it seems a distant dream, but being an interior designer seemed the same when I studied the first lesson that I had received from NYIAD!'