It took Heather Green a little while to get back to us for our interview for this months Student Postcard. When she wrote back, she said, I'm just so stinkin' busy! That is in no way to be taken as a complaint. I am designing my brains out! 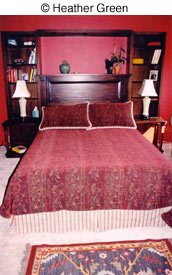 Little did Heather know when she first realized she was interested in interior design that it would become her lifes passion. It all started when she and her husband built their new home, and she found herself watching television shows about home improvement and decoration. She loved the shows, and busied herself gathering ideas from them, but found herself thinking she could do better, with a little education.

I thought it would be great to take some kind of interior design course so I could finish the interior in a professional manner. That's when I saw the NYIAD advertisement in the back of one of my decor magazines, and sent for information, she said. When I received the course catalog I shared it with my husband, and we decided to go for it!

As happens with many of our students, NYIADs flexible, study-at-home format appealed to her.

I knew that with four children, one of them being a newborn, there would be no way for me to go to a conventional college, she said.

Now, Heather has almost more work than she can keep up with. Shes currently working on seven homes, and has several more waiting. Its not as daunting as it may sound, as the homes are in various stages of completion, and each job is, of course, different.

Of those seven, several are almost done, several are just beginning, and the rest are in the middle somewhere, she said. A couple of them are a complete home facelift, some are remodels, and some are only just a few rooms.

Because Heather understands that the clients style must take precedence over her own, every job is different. One important element to remember is to listen carefully to what the client tells you about what they want.

Take in everything they say, and interpret it all over their house, Heather advises. When you leave their home, it should say everything about them, and very little about you.

Putting this philosophy into action means that Heather is never bored.

I have just completed a living room in over-the-top Baroque, and at the same time did a guest room in a minimal Asian style. They are all so fun! 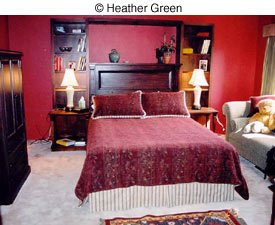 Heather sent us these photos of her work, explaining that the piano bed involved a clever bit of recycling: she asked her carpenter to remove the front legs of the upright, and then build book shelves for either side of the head board, using the legs to support the tables that are a part of these shelves.

The front of the piano still lifts, but instead of strings, you'll find shelves for storage, while there are lights under the shelf stretching from bookshelf to bookshelf, she said.

The bed covers are a cinnabar-colored chenille while the duster and cornice is a ticking with both the cinnabar and the celadon green found elsewhere in the room.

I finished the window with a luscious silk velvet, she said. Below the window is a custom made chaise lounge in our green (with throws to match bedding) and I had the rest of the furniture in the room refinished to match the piano bed. I thought the rug was a nice little accent.

Serendipity also had its place in her design of this room: Could you believe my luck with those lamps Antique celadon lamps that matched without a flaw, and they were a deal! A couple of shades and voila! Unfortunately, these pictures were taken before all accessories were in place, so the walls seem a bit bare. I did finish the room with my clients artwork, and one of my assistants found a beautifully carved wooden panel for over the headboard. 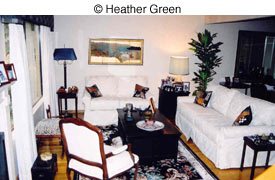 For this living room design, Heather used a combination of items the client already had and new pieces, focusing on creating a room that is both functional and updated. I found this coffee table to replace a brass and glass table she had, and changed her window treatments completely they were very formal before, not really what my client was about, she said.

But it was Heathers personal touch that really made this room a hit with the client. Please take note of the throw pillows on the sofas, she said. They were made from a skirt that belonged to my client's mother, who was lost years ago and was missed terribly by my client. I think this one touch pleased her more than hundreds of others.

The guest bath for another client underwent a complete makeover. It was very dull, plastic molded counter and sink that was off center, Heather said. One wall was covered with a wall mirror, and the room was lit with an overhead globe.

Again, Heather took into account the clients own personality and personal history. 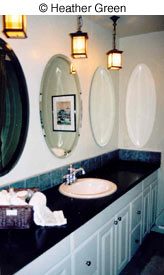 My client grew up in the Orient, so I tried to bring in some of that influence without going overboard. These lamps were a chandelier I disassembled into parts so they could be used for pendants. The counter is now teak, and there are drapes on either side of the stool area for optional privacy. You can't see the Jacuzzi tub surrounded by jade tile, but it's there!

Heather, like many NYIAD students, initially took the Course just because she wanted to design a fabulous new home for her family she didnt have any intention of going into business for herself. But then, a friend who is a designer couldnt finish one of her jobs, and called Heather, knowing she was taking the NYIAD Course.

Panic! is how Heather describes her response to that first call. But she took the job on, and it was a huge success, she said.

And as it turns out, that first job has led to all the others. I have gotten all of my work from that one job, Heather said. I have done no advertising. Word of mouth is the very best advertisement, and one you can't pay for.

When asked what she likes about being an interior designer, Heather answered unequivocally. What's not to like I get to be with fantastic people, use my wildest ideas and get paid for it, she said. This is the ideal job. Sometimes I have to force myself to stop designing!

This from the woman who initially only wanted to design for her family, and who couldnt attend a residential college because she was busy raising her children. But Heather has discovered that her new career, while utterly engrossing, still allows her to give her all to her family.

I'm building an empire, yet I can be through with work at two to pick up my little girl from kindergarten, she said. The older kids come home soon after her, so then my day is about them.

Part of Heathers enthusiasm probably stems from the way that shes incorporated what being a designer is all about. She knows it is about more than just selecting wall color or selling a client on an upholstery idea.

You aren't really selling drapes and paint. People will hire you and they will hire you to make themselves feel good. They want someone to take care of them, to listen to them. 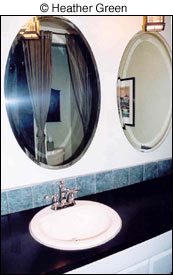 By following through on her initial interest in design, Heather has seen that proper training is crucial for creating a business around a passion. NYIADs inclusion of concrete information on the angle of running a business not only helped Heather develop her eye for design, but also taught her how to run a successful business.

Just because one loves to decorate, that doesn't mean they're ready to start a business. The materials NYIAD gave were a great start, Heather said. I now have three full-time employees on payroll, not to mention all the sub-contractors I use regularly. Scheduling them, inspiring them, rewarding them, scolding them, it's all very challenging. Very rewarding, though!

Heather keeps singing the praises of NYIAD, and has encouraged three people she knows to sign up for the Course. She tells newly-enrolled students that the most important thing is to believe in themselves.

I know this sounds tired, but you must. No one else can do what you can do. No one will have your ideas, and people PAY for ideas! Finish your work, discipline yourself. See yourself as you would like to be, not like you are now. Plan, work, and be nice! Clients aren't always likeable it's your job to find something about them that's lovable.

We asked Heather whats next for her, and she answered with her usual enthusiasm: Wow! What isnt I plan this year to move into some bigger homes, bigger jobs, while keeping the smaller ones too everyone deserves a beautiful home! Shed also like to get into commercial design, and, as if she isnt busy enough already, shes planning to open a restaurant next fall with, of course, all original decor.

Were not sure where Heather will find the time for another project, but with her passion for design, her ability to run her business, and with her family behind her, were sure shell continue in her steady course of success.

Come learn at our interior decorating school and become a success just like Heather!