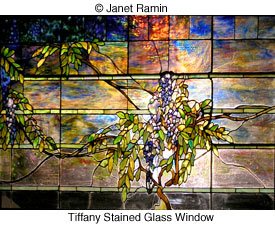 The name Louis Comfort Tiffany conjures up visions of colorful, shimmering stained glass art to many people. These masterpieces of stained glass appeared in Tiffany designed window panels, light fixtures, and small glass panels. What isn't as well known was that Tiffany also excelled in the fields of interior design and industrial design.

Born in 1848 to the famous jeweler, Charles L. Tiffany, Louis Comfort Tiffany had the financial means to pursue his art to his highest imagination without having to compromise on making a profit. In 1879, Tiffany started a firm, Louis C. Tiffany & Associated Artists along with painter Samuel Colman, textile designer Candace Wheeler, and artist-furniture designer Lockwood de Forest. Through this firm, Tiffany landed diverse clients including Mark Twain and President Chester A. Arthur. For the President, Tiffany redesigned the public rooms of the White House.

Tiffany then went on to open his own glassmaking company called Tiffany Glass Company in 1885 which later became the Tiffany Studios. Based out of Corona in Queens, New York, the studios were a shining example of a successful retailer of artwork. Tiffany turned his designs into saleable vases, bowls, plates, light fixtures, rugs, and furniture. Tiffany Studios produced a rare mix of affordable art for the masses and high end artwork for the wealthy. 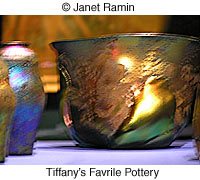 In 1881, Tiffany created opalescent glass – different colored glass fused together to create greater hues and effects. His technique aroused the ire of the glass artist community because opalescent glass deviated from the standard of painting enamel on clear glass, a practice which can be traced back to Gothic times. Tiffany went on to develop a new glass-blowing technique of creating iridescent glass which he called Favrile or "handmade". His Favrile vases and bowls quickly won admiration and fans around the world.

What most people don't know about Tiffany was that he also had a refined architectural and interior design sense. His piece de resistance was his own home, Laurelton Hall in New York. His ideas in integrating art, decoration, architecture, and landscape culminated into his house. Built in 1905, Laurelton Hall graced a 600 acre waterfront estate in Oyster Bay, nestled among Long Island's fabled North Shore. 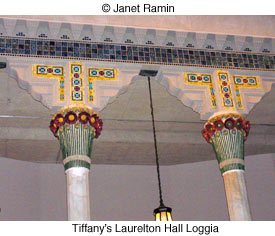 Free to unleash his creative desires on his estate, Tiffany planned each room around his needs and slowly expanded outward. Eventually his designs culminated in an 84 room mansion built on classical lines. Tiffany believed in developing his designs from nature. His own gardens provided the inspiration for much of the architectural details of his home. The marble columns of his loggia are topped with yellow glass daffodils. Glass canopies of wisteria vines decorated his dining hall walls.

The living room displayed his Four Seasons panels. This artwork was exhibited first at the Parisian Exposition Universelle and won Tiffany the gold medal and eventually led to France awarding him the Chevalier Legion of Honor. 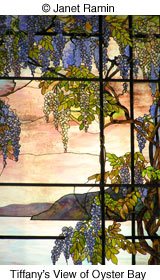 The large View of Oyster Bay panel at the Metropolitan Museum is a view from his own home looking out towards the Long Island Sound.

Sadly Laurelton Hall burned down in 1957. The loggia was the only section saved from destruction. It is now displayed at the Metropolitan Museum's American Wing in New York. Much of the furniture, lighting and accessories in the house that could be saved was collected and is now displayed at the Charles Hosmer Morse Museum at Winter Park, Florida.

Commissioned by churches, wealthy patrons, and other institutions, Tiffany created many large glass panels that usually projected his interest in landscapes and nature. One of his famous works was Autumn Landscape, commissioned in 1923 by Boston magnate, Lorin Towle, for his neo-Gothic mansion. Unfortunately, he died before the glass window was completed and was eventually sold to the Metropolitan Museum where many people could now enjoy it. Besides stained glass, Tiffany also created glass mosaics. One of the most beautiful works of his is Landscape and Fountain, a shimmering Favrile glass mosaic that is also displayed at the Met. 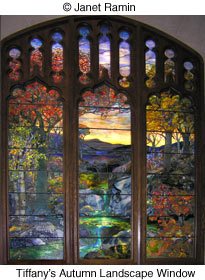 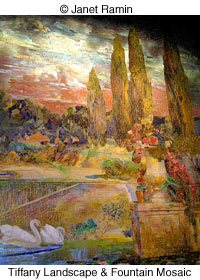 The Metropolitan Museum is also showing a special exhibit on his home, Laurelton Hall, now through May 20, 2007. The exhibit can be previewed at their Web site www.metmuseum.org. Actual structural components like the glass daffodil topped columns are displayed at the show, plus other items that Tiffany collected. If you take a careful look at these items by other artists, which include everything from feathered headdresses to American Indian baskets and Asian wooden doors, you can see how Tiffany was inspired by them.

Tiffany's most famous legacy to the world may be his stained glass windows but his vision of Laurelton Hall with its seamless integration of architecture, furniture, and accessories is an enduring inspiration and a challenge to today's architects and interior designers. Many designers these days are finally realizing that without careful long-range planning of the building and its interior components, true harmony will never be achieved.

How to Update Your Home for Fall

If you’re a student in NYIAD’s interior design or home staging course, styling and decorating your own home is a great way to… 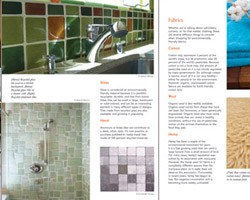 Materials in the Green Design Movement

Here's an excerpt from the new NYIAD Complete Course in Interior Design Lesson on Green Design. Glass: Glass is considered…